The end of the commercial sealing industry is now inevitable.  It's time to take the politics out of the debate and simply acknowledge the facts.
The Conservative government is ignoring Canadian opposition to the commercial hunt and has turned a deaf ear to the international community and its global boycott of commercial seal hunt products.  Russia, Belarus and Kazakhstan have joined the European Union, the United States, Mexico and others who have banned trade in seal products. And despite millions in taxpayer dollars spent by the federal government, markets in China have failed to materialize.  The global market for these products has been eliminated.

There now appears to be unstoppable momentum towards the end of the commercial seal hunts around the world. Canada stands virtually alone in its defense of this industry.

Workers in East Coast rural communities need to hear the truth from the government.  They do not need to be patronized with handouts and hollow promises that the industry might come back, some day, maybe...  The Conservative government should stop wasting taxpayers’ dollars, tell the sealers the truth that the market is dead, and transition these hard-working Canadians into sustainable economic development programs.

This is why I am re-introducing legislation to end the commercial sealing industry in Canada.  Formally acknowledging the end of this industry will send a clear message to Canadians that we are working towards a viable future for the workers of this region and it will end the costly and economically damaging challenges currently before the WTO.

I encourage you to contact members of the Senate of Canada and call on them to support my bill to end the commercial seal hunt in Canada.
For the latest updates, please follow me on twitter at: @mharb20.  Your efforts are making a difference and I thank you for your encouragement and support. 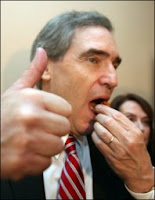 
We are targeting the Prime Minister of Canada, the Liberal leader, and the Governor General of Canada today with an email-bombing campaign. We hope to have 4000 emails sent! PETA and IFAW are on the road, running across Canada behind the Olympic torch. We need to support them in their efforts. Please cut and paste what you see written below, sign it if you agree, and send it to:

I have recently viewed the attached videos that were just released via the internet. It's hard to believe that Canada, a one-time leader in the world could let these crimes against animals occur. This is nothing short of ecological terrorism! I never thought I would say this, but I am ashamed to be Canadian. These are not the actions of my country, these are the actions of a very small province (Newfoundland) that has brought nothing to us but shame! This hunt only continues to exist because it is propped up by a range of government subsidies and taxpayers money. The vast majority of Canadians and caring people worldwide have been calling for an end to the hunt for a very long time, and the time to act is now. We understand that Senator Mac Harb has brought a bill before the house which was igorned. This is NOT acceptable! He is speaking on behalf of all Canadian people.

Please use your unique position as representatives of Canadians and as citizens of the world to be our voice in Parliament and fight for an end to this cruel slaughter. We, the people of Canada, will accept nothing less than an end to this barbaric treatment of our animals!

Please cc Senator Mac Harb on all Letters to the Senators
Email: harbm@sen.parl.gc.ca

Ask the above Senators to support Mac Harb in ending the Seal Hunt Forever.
Send a personal letter, Choose A Sample Letter or use the Automated IFAW Form

In addition you can send a letter to all the Canadian Senators.

Senator Mac Harb speaks about Canada and world wide opposition to the seal hunt. He eloquently states that as activists who oppose the seal hunt we are the majority, not a fringe group.
What a joy it is to have a Senator in our midst who actually celebrates Canada and listens to the people here. Please send Senator Harb an email of appreciation: harbm@sen.parl.gc.ca

When I found out that the the Canadian Senate had one Senator with the courage to stand up in front of the Senate and ask that Canada End the Seal Hunt in 2009 I was incredibly relieved and overjoyed.

When I found out that not one single person in the Senate agreed with his position, I was devastated and furious.

I followed up on one of the many wonderful initiatives from IFAW who was there that day to support Senator Harb and created my own Facebook Event called take the Harb Seal Bill Challenge - A Letter A Day to Keep the Sealers Away.

The idea was to keep the focus and action of letter writing to our Senators encouraging them to revisit this bill and second the motion on the next round.

That day, mostly due to IFAW's member alerts, but nevertheless, we all managed to shut down the systems at Canadian Headquarters with the flood of emails.

They are hearing from the world how much this Seal Hunt is despised, hated, loathed. There are not enough words to express the view of most Canadians and the world of what a despicable crime this is.

I want to encourage everybody to continue writing to our Canada Senators, Ministers, Prime Minister and European Union Officials to express their outrage that not only did not one single person second the motion, but the only voice heard in response was "Never!"